Hello, I’m Locksley. I’m doing the A to Z Challenge today. My letter is K. 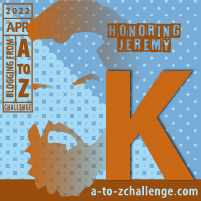 Kale is a type of cabbage. Or it’s related to cabbage. I think it’s nicer.

We get two types of kale. Mummy’s kale and box kale.

Mummy’s kale grows in the garden, including in the winter. Not many things grow in the garden in winter. it grows in a hard stalk, which we can eat if we really want to. The leaves are best. They are long and crinkly. At the moment we are nearly out of kale because all the winter plants have finished. The last two weeks we’ve had sprouting kale, which was very tasty, and the stalks were nice and crunchy, but soft.

We also get Mummy’s kale in the box. But most box kale is a broader leaf, and very frilly, almost curly. The stalks in the leaves are thicker and sometimes I leave them. The box comes every week, and has different veggies in it. Even Mummy doesn’t know exactly what’s going to be in it. Mostly its good, but some things are very strange. Mooli. I have no idea what that is. I didn’t eat it. We had some kohl rabi peelings as well. They were tasty. Mummy said she was keeping the best bits for herself. I suppose she has to eat nice veggies too.

Our box man is Amrick. I hear her talking to him on Friday nights when he delivers the box. The boxes are good to play in, too. After Mummy’s taken the veg out, of course. Ooh, I wonder what it would be like playing in the box when it still has veggies in it! That would be my favourite thing ever!

Do you like kale? Do you have a veggie box?