It can be very difficult, you know, three of us older chaps and one six-month-old. It’s lovely to have him around, and it does make us have a lovely big run, but…

The problem is that Locksley thinks I’m his dad. Or his brother. Whatever he thinks, he follows me everywhere. All the time, and you know, sometimes I’d just like to lie down and do nothing. And when I do that, he gives me about five minutes, then he’ll climb on top of me. He’s not doing the ‘mounting’ thing so much now, but he just cuddles up by lying across my shoulders.

Sometimes he lies further back, where I have a bit of a sore back (Mummy knows about it and spoke to the vet).

But sometimes he just keeps on and on… and on Thursday I told him off, and he bit me! On my lip! I was covered in blood! And as he did it just before Mummy came in, she took one look at me, picked me up to take me into the kitchen for treatment, and got herself covered in blood too.

Well, she cleaned me off and put some cream on it (it’s called manuka honey, medicinal grade), and it soon stopped and we had our cuddles as usual. And she kept me on the antibiotics till yesterday.

I just have my heart meds now, and my lip is healing fine, so now harm done, although Thursday and Friday it was a bit puffy.

Locksley’s been a lot better ever since Mummy set up the end (where our ‘snug’ is’ as a ‘sin-bin’ to put him if he just needs to calm down and cool off. He went in there twice on Thursday, and once yesterday, and he’s calmed right down. It just to give us older boys a break from his attentions. He’s not in it for long. And at the weekend Mummy took him out for several extra runs on the floor, too, although he doesn’t run around much. He hasn’t learned to be inquisitive, like a normal piggy.

I think he’ll learn in time, but I think Mummy wishes she’d separated him from Ludo long ago. Before I went in with Neville and Roscoe. Then he’d have come in with me. And I’d have got no peace at all, but he’d have been younger and easier to teach. He’s a bright boy, though. He’ll get there. Once he’s unlearnt the few things Ludo taught him.

More news next week. Which is Easter. Mummy says we’re getting Easter presents. I wonder what?

4 thoughts on “I’ve been in the wars” 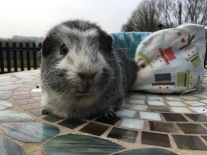 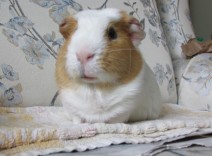 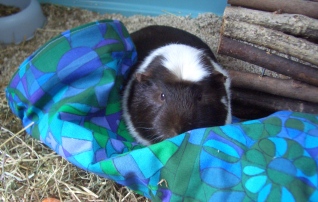