Last week was funny.  We went out in the garden on Monday and Tuesday. The next day it started raining so we didn’t go again until Saturday.  We still got our floor time in the morning. One of those days I got into a bit of an argument with Oscar when Mummy wasn’t looking.  He bit me on the nose!  It was only a scratch. By Friday it was looking a mess, because Mummy had washed the neat dried blood off and put sticky stuff called medicinal honey on it.  So it looks much worse than it is.  Here’s a picture of me on Saturday to prove it!

Sunday (yesterday) was nice.  Mummy moved our runs.  There’s less shade so we have to have the green shades up. There’s much more space, running between the vegetable beds again.

The most important part of Sunday was Midge’s birthday!  Mummy did one of her special cakes, at least that’s what Percy says it was. I’d never seen one before. Oscar had his own portion, which he ate right up, and so did I. Mine didn’t have candles on it, because it wasn’t my birthday.  My birthday is in February.  I share it with Biggles, who shared Midge’s cake with Midge and Percy.  I hope we get cake in February.  It’s yummy.  I finished it all up.  Well, so did everyone.

Midge and Percy with the cake

7 thoughts on “My Nose and Midge’s Birthday” 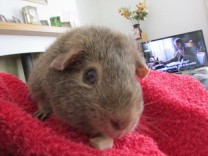 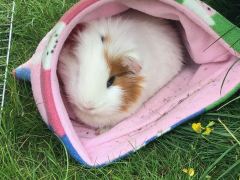